US dating
Quick Advice
When using the Search feature, how does LuvFree sort the profiles that I see in the search results? 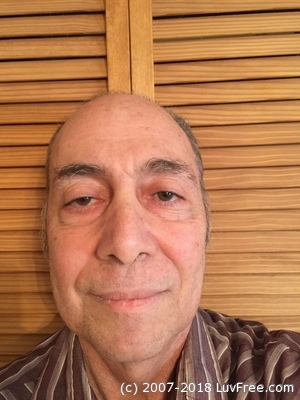 Hello, how are you?

More about me:
I started playing the guitar professionally at the age of 13. I attended the High School of Performing Arts where I majored in music. After graduation I joined the Army. After I was discharged I began to play professionally again. I played in Broadway musicals and played for Frank Sinatra, Dean Martin, Loretta Lynn and Connie Francis and other stars. I graduated from Brooklyn College as a music major. I built and repaired computers for about 20 years. Sometime in the 1980's I became a commercial photographer, which I did part time along with my computer business. When Karaoke came out I became a karaoke DJ. It was sometime in the 1990's. I am now retired. I will tell you more about me when I see you as I have other interests. I was raised by my grand parents and was taught to be a getleman, polite, and respectful. I am an old fashioned man who will hold the door for you, and I also will hold the door for males and females, young or old, and cats and dogs, chipmunks, squirrels, raccoons, ferrets, flys, bees, etc. I once had a ferret trapped in my wall for a few days. After I let it out it ate my cats food and eventually left.