US dating
Quick Advice
How can I view my own profile as it appears to other users on LuvFree?

There are two ways to do this. The easiest way is to log in to your LuvFree account and once on your "My Panel" page, look in the "Manage profile" section in the upper right corner and click the "View profile" button. The second way is to use the search function. Click the "Search options" link in the Quick Search box to the right of your "Manage profile" section and use the "Search by Username" function at the bottom of the page. Type in your username to find your profile and view it just as you would with anyone else. 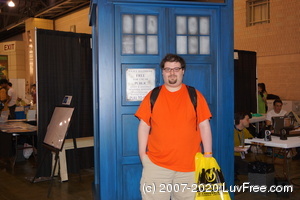 Looking for something real and lasting

More about me:
I’m usually not very good at writing these things, but let's give it a shot. Pretty shy guy until I get to know you a little better, mostly due to my past experiences. Regardless, I always try to keep the mood light and fun. My friends would tell you that I'm honest, loyal, funny and caring.

As for my interests, I'm a big gamer (tabletop, board and video games), a fan of anime/manga, Marvel/superhero, WWE, sci-fi/fantasy, and a lover of comedy in just about all forms (movies, TV, stand-up, British comedy).
If there's anything else you’d like to know about me, please send me a message.

Movies: Guardians of the Galaxy, Space Balls, Gintama the Movie, Final Fantasy 7: Advent Children, Scrooged, The Avengers, any of the Iron Man movies, Captain America, Evangelion 1.11 and 2.22, The Watchmen, the two newer Star Trek films, and all kinds of "bad" movies.

Music/Artists: Video Game and Anime Soundtracks, Weird Al Yankovic, The Monkies, Classic Songs from the 60's - 80's, any form of Techno, and Christmas/holiday music if it's that time of year. To be honest, I'll listen to just about anything except dub-step and rap.

Video Games: The Kingdom Hearts series, almost any Final Fantasy game, Cube World, Saints Row 3 & 4, almost any Sonic game, The Mega Man and Mega Man X series, The Binding of Issac, and the Pokemon series (of course). There's plenty more, but too much to list here.

If you're looking for something that will hopefully become more serious over time and we share some similar interests, please don’t hesitate to send me a message. I also really appreciate it when our messages are more like a conversation, rather than just a question and answer session. Please understand, I ask questions because I want to get to know you. If you’re interested, please show you want to get to know me too. Believe me, you'd make my day!
:)

About my ideal partner:
Someone kind, caring, shares at least some similar interests and is looking for something that will hopefully become more serious over time.